Controversial Opinion: The Iron Man Mk 42 Armor in 2013’s movie Iron Man 3 is the worst suit of armor in the entire Marvel Cinematic Universe. Its tan/gold and maroon color scheme was too far removed from the iconic red and gold that every other movie has followed.  More–the armor never worked. It was the jalopy of the Stark collection.

In the pages of Marvel comics they followed the movie by introducing Tony Stark’s Armor Model 42. It was introduced in 2013’s Iron Man Volume 5, Issue 1. And where the movie went wrong, the comics went right!

This version of the Mark 42 armor is primarily black with gold accents. It retained the modern Iron Man style while also looking sleek with the black scheme.  (Face it, Black and Gold beats Maroon and Tan any day).

Now this armor has come to us in figural form thanks to Mezco’s One:12 line.

One thing that shocked me with the figure was when I touched it, it felt cold. Instantly I realized the figure had metal parts on his shins and forearms.  I knew the figure was advertised as having “real metal components” (and I don’t know if that’s different from die-cast metal), but in hand these add a real heft to the figure that I like. They also add sheen to those areas of his body. I don’t know if there is an engineering or a licensing reason they did this (perhaps if the figure were all plastic it would fall under Hasbro’s license? That is conjecture), but it is cool.

Also nice is the light-up ARC reactor. The on/off switch and the battery compartment is very easy to get to, and I don’t feel that I’m going to break them with gentle use the way I do several Hot Toys figures.

There are also six interchangeable hands so Iron Man can be making blast motions (Stop! In the Name of Love!), fists, or neutral hands.

But the best thing about the figure is just the look of it. The black and gold, with red on the chest, hands, and eyes, is just cool!  The blacks do vary a bit in glossiness on different areas of the figure and its joints, but it does not detract from the overall aesthetic of the toy. With 30 points of well-hidden articulation, you can display this figure in tons of awesome poses.

I really like this figure a lot, so I want to preface this groussing with the knowledge that I am picking nits here.

The biggest complaint I have is that this appears to be a straight repaint of Mezco’s original Iron Man.  As such, the armor isn’t exactly comic accurate. This figure shows the “abs” that Iron Man had in his original armor, whereas the armor in the 2013 comics had a segmented design similar to the movie armors.  More, the red light-up circles seen in the comics on the armor’s arms and legs are missing.

The armor still looks very cool, but for hard core comic fans this is not the Mark 42 you’d want.

More, they even included the instructions from that original Iron Man release–and they aren’t entirely accurate.  The original Iron Man came with a magnetic, adjustable faceplate that reveals Tony Stark’s face below. This Mark 42 does not have a removable faceplate. Because the instructions showed how to remove the faceplace I worked at it for about five minutes. I now feel very lucky I didn’t snap off the face of the figure.

Finally, there are just a few spots on the figure where the gold paint spread out onto the black of the armor.  I noticed it most on the bicep where the gold just went a bit off the armor plate.

Oh, and this is probably just me, but the chest and hand blast effects included are not something I would ever display. Perhaps I just have a dirty mind, but to me they resemble adult novelty toys. Especially the chest effect seems “ribbed for her pleasure.”  I think it would be better if they all didn’t end with a rounded “head.”

The lack of comic accuracy may annoy comic book purists, but this is a bad-ass looking repaint of Mezco’s Iron Man.  Since it is an exclusive, being a straight-up repaint is perfectly fine by me. (If this was a regular retail release and they didn’t make it more comic accurate I’d have bigger complaints).

It sold out in a blink, but if you think this armor looks as cool as I do, you won’t regret buying it. 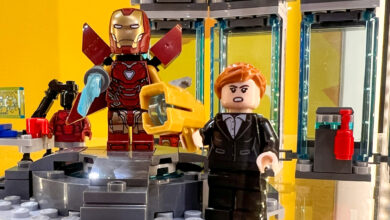 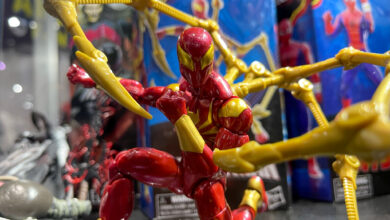 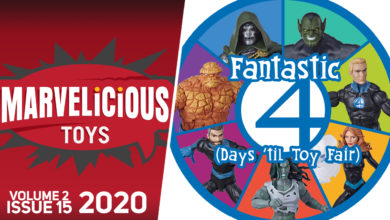