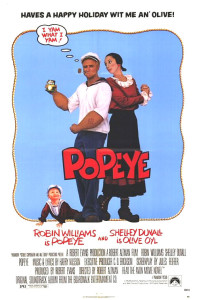 In The 40-Year-Old Critic, Venganza Media creator and host Arnie Carvalho recalls a memorable film for each year of his life. This series appears daily on the Venganza Media Gazette.

What, you thought The Empire Strikes Back was a given for 1980? Absolutely not!  Let me explain.

1980 is a special year for me because it is the first year I can actually remember seeing movies in theaters. I have vivid recollections of my mother taking me to see The Empire Strikes Back on a hot summer day while weekending in Chicago, and I remember going to see Superman II when it opened at our local mall. And I remember later that year my sister Susan taking me to see the Robin Williams “comedy” Popeye, and sadly this is the moviegoing experience I remember best of all.

As a child I loved cartoons. Mostly, I was interested in superheroes like Superman, but I watched the Bozo show religiously and it featured a variety of cartoons, including Tom and Jerry, Mighty Mouse, and Popeye. I consumed this animated fare as part of a daily television diet.

My TV viewing was not confined to mornings, I was also starting to watch prime time shows.  Being the youngest child in the house I rarely choose what shows were on our one television.  Occasionally, when I was alone, I’d get to see Dukes of Hazzard or The Incredible Hulk. But most nights I watched whatever my older sisters wanted to see.

Their tastes ran to sitcoms of the day: Happy Days, The Jeffersons, Three’s Company,The Facts of Life, and my absolute favorite, Mork & Mindy. Robin Williams’ character, along with his colorful costumes, kept my attention for the full half-hour every Thursday night.

So, Williams as Popeye? It had to be a no-brainer for Susan to take her kid brother to that movie.  To this day, the experience of seeing that film is burned into my brain. 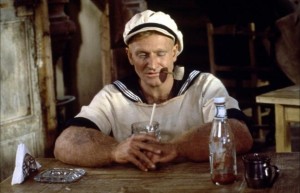 I yam what I yam…a bad movie.

My first reaction to this dirty, ugly picture was, “This isn’t my Popeye!”  I wasn’t sure what had happened to the character I loved from The Bozo Show, but as shown on-screen “our hero” Popeye was beaten down and disavowed.  His every scene seemed to be a boring exercise in humiliation.  Worst, this Popeye hated spinach! A recent rewatch made it clear that the ingestion of that canned plant is the character’s arc — his origin story — but to a 6-year-old it seemed this movie didn’t know the first thing about the cartoon I loved. It lacked the crazy, fast-paced antics of the animated show and replaced it with warbled songs sung by Shelley Duvall and Robin Williams, neither of whom should ever be allowed to sing again (Aladdin aside). It seems even Williams was embarrassed during the making of the movie–he looks depressed in nearly every scene.

And it wasn’t just Williams, it was everyone. As Pappy, Ray Walston was a frightening character who denied Popeye’s parentage. Bluto was a bully that seemed comical in animation, but when personified in the flesh his hairy bulk repulsed me.

At 6 years old I did not yet possess the vocabulary to express how this movie made me feel. I did not know the meaning of words like “abrasive” or “grimy.” I couldn’t properly express that Popeye lacked the fun, spirited tone of the cartoon, and that its rundown river-town setting made me feel like I needed a hot bath. I didn’t just experience disappointment, I had a feeling of utter betrayal — and not just by Popeye. I wasn’t that big of a fan where an inaccurate on-screen portrayal would scar me.

No, I felt betrayed by cinema.

Up until this point in my life I’d had a magical experience every time I had gone to the movies. I’d seen Yoda teach Luke Skywalker about good and evil. I’d listened to Muppets sing and loved it. I’d seen God in the guise of George Burns. I’d been enthralled as Mickey Mouse made brooms dance. I’d believed a man could fly!  I hadn’t seen a lot of movies in theaters at this age, but each one seemed hand-picked for maximum enjoyment. I thought the movie theater was a place where only good things happened.

Seeing Popeye made me realize, for the first time, that a movie could be really, truly terrible.  In some ways, it was the death of my childhood innocence. 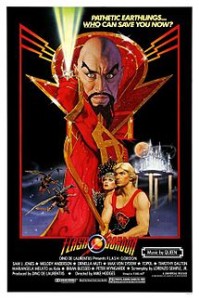 Popeye plus Flash Gordon — a double feature made in hell

I insisted my sister take me back to the movies a week later to wash the taste of spinach out of my mouth. She picked a film I hadn’t heard of, Flash Gordon. Again, I thought I would be seeing another cartoon hero come to life (I’d mistaken it for the DC Comics hero, The Flash).

It was like a one-two punch, Popeye and Flash Gordon. I’d never look at movies the same again.

From the moment I walked, shell-shocked, out of that mall theater something inside me changed. My trust in the silver screen was broken. It would take many years for me to fully comprehend the enormity of that concept — that choices had to be made where I spent my money and time — but it all started with what surely must be director Robert Altman’s worst picture.

I am now about to turn 40, but inside I’m still a 6-year-old every time I go into a theater. I still hope every movie I watch — especially every theater-going experience — will be magical and wondrous. And I still feel betrayed when I’m instead given something as disastrous as Popeye or Aliens vs Predator.

At least now I can channel those memories and spare others from the letdown I experienced. As a critic on Now Playing Podcast I, hopefully, can warn people when there’s a Popeye at the multiplex. Also, as an adult, I can now fully put into words those negative feelings I had as a child.

Thinking now about 1980, I realize so many films I love today were released that year: The Empire Strikes Back, The Blues Brothers, Raging Bull, Ordinary People, and, of course, the original Friday the 13th.    I have memories of seeing them all, but none are as vivid as that horrible Saturday when I saw Popeye.

Arnie is a movie critic for Now Playing Podcast, a book reviewer for the Books & Nachos podcast, and co-host of the collecting podcasts Star Wars Action News and Marvelicious Toys.  You can follow him on Twitter @thearniec