Many actors have played The Punisher, but Jon Bernthal’s portrayal on Netflix’s Daredevil series was the one that got it right.

Mezco also has made many Punisher figures. But as a Punisher fan who loved the Netflix series I was more than happy to get one more and have Bernthal immortalized as Mezco’s One:12 Collective figure.

Bernthal’s steely gaze and gruff face are the perfect look for this character. And it’s also a perfect choice for this line as it tends to be accessory heavy. If there’s one thing The Punisher needs, it’s lots of weapons.


The figure has 28 points of articulation and is fairly easy to pose, and there are 4 pairs of hands, which gives you plenty of options. The Punisher needs to do two things, fight and shoot guns. And Mezco has you covered here. Not only can you achieve the right shooting pose, the right gun and hand for the gun is included. Included is a machine gun, 2 handguns, each with a different color handle, as well as a knife and sheath.

(Though, I must say–Mezco is just showing off by having the pistol have a removable clip. It’s awesome…but unnecessary)

There are blast effects included for the guns; however, these never look quite right. It’s not a deficiency in the product, it’s just that the tech isn’t there to make an accessory like this look like anything other than a gummy bear.

Also included are two different heads. There is a clean version, no cuts, bruises or blood. There is also a dirty version. The dirty version is The Punisher post fight. He’s battered and beaten. It’s a nice alternative head for those fight scenes.

Mezco takes great care with their One:12 line. They market to collectors, and therefore not only is the box attractive, but it’s well thought out. Everything is packed with plenty of protection to prevent damage in the box. It is double-boxed like we reviewed with the Black Panther figure, and I love it when Mezco uses that more sturdy package.

The Punisher is another solid entry in the Mezco One:12 line. 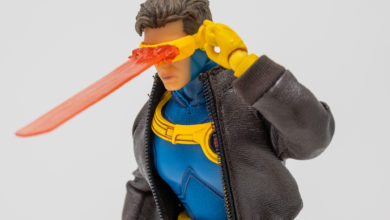 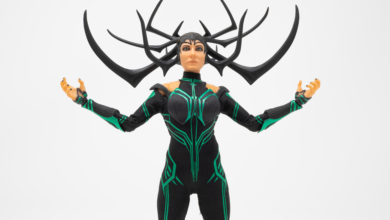 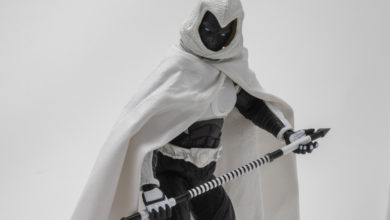 Over the Moon for Mezco’s SDCC Exclusive One:12 Moon Knight (Crescent Edition)

Follow
marvelicioustoys
Because not all Marvel collections can be bagged & boarded!