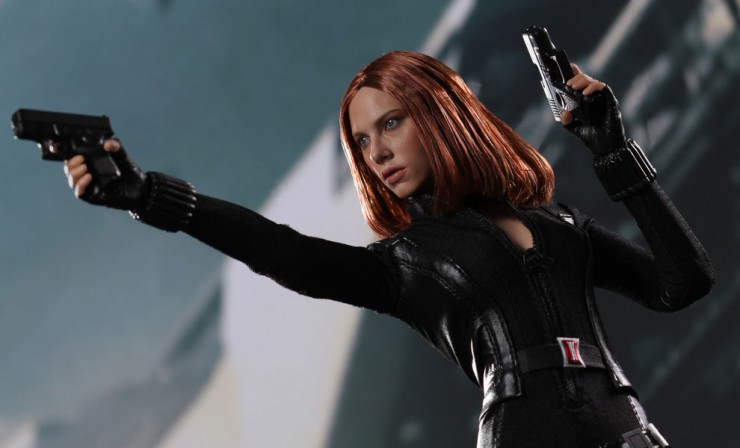 The next film in the Marvel Cinematic Universe, Captain America: The Winter Soldier, has fans very excited.  With Steve Rogers fighting the metal-armed Winter Soldier, plus Marvel heroes Nick Fury, Black Widow, and The Falcon all  along for the ride, fans are excited and the Hasbro toys are flying off the store shelves.  Now Hong Kong based toy company Hot Toys has put up for pre-order their first release from this new film — Natasha Romanoff as the Black Widow.

Featuring a new likeness of actress Scarlet Johansson, updated for her appearance in Winter Soldier with movie-accurate facial expression, straight real fabric hair, and movie-accurate make-up.  The body has over 28 points of articulation, and the outfit has buckles with boots, leather-like trims, and belts with holsters on the thighs.

More, this piece is loaded with accessories, including 9 interchangable cloved palms, two pistols, 2 sets of Widow’s Bite bracelets (with and without shock effect) , a mobile phone, and a Hot Toys Black Widow base.

The previous Hot Toys Black Widow figures have jumped in price on the secondary market, even the lower-detailed Iron Man 2  version.  So don’t miss out on this new Hot Toys figure, order yours now from Sideshow Collectibles — the only authorized Hot Toys reseller in the United States!

TODAY ONLY – 35% Off Bowen Statues at EE

Issue 112: A Glutton for Punisher