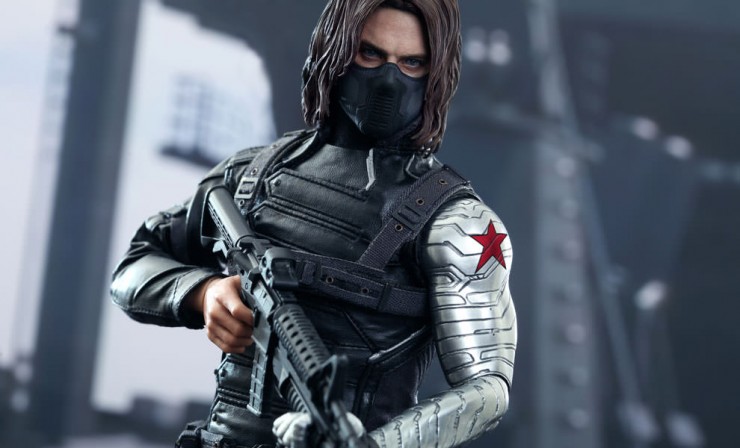 Sideshow Collectibles and Hot Toys are certainly hoping to build on the hype for next week’s release of Captain America: The Winter Soldier for I cannot recall another time when they released two new Hot Toys figures in two days.  Yesterday’s Captain America Golden Age Movie Promo Edition sold out in under 24 hours (Wait List is Still Available), and now to stage that awesome fight from the movie comes The Winter Soldier Hot Toys one-sixth scale Movie Masterpiece Series figure.

Standing 12-inches tall this figure has 30 points of articulation and an amazing likeness of Sebastian Stan as Winter Soldier with two new heads, one masked and one unmasked with movie-accurate make-up.  You also get 4 pairs of interchangable palms (the left ones are gloved), and a ton of weapons including a machine gun, remote bomb launcher, submachine gun, spike with sheath, 2 daggers, and 3 pistols.  Plus a pair of goggles and a figure stand with the Winter Soldier nameplate.

While this figure is certainly not going to sell out as fast as Cap, I have no doubt that with this movie’s expectation it will sell fast, so be sure to get your order in now at Sideshow Collectibles!

BACK UP FOR ORDER — Preorder Alert: Guardians of the Galaxy Marvel Legends Figures